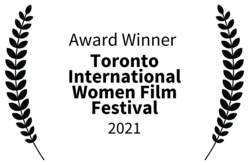 These awards are added to the Outstanding Achievement Award for Animated Short that Burmer won in March from IndieX Film Festival.

Toronto International Women Film Festival focuses on female-driven stories, independent female directors, composers and other film artists. The festival selects films created from artists from around the world, focusing on those who advance the conversation about women and film. Those who are selected for the monthly competition, such as Burmer, are considered for the annual festival event.