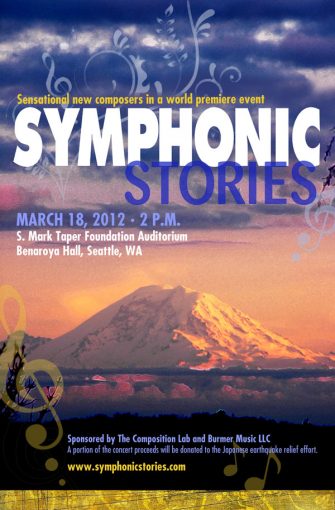 Symphonic Stories took place on March 18, 2012 — a world premiere of original orchestral music created by some of Seattle’s finest emerging composers. The concert featured seven composers, many with prominent musical careers in the film and video gaming industries, and showcased stories told through symphonic compositions, each highly individual, imaginative and compelling. Each composition, about 10 minutes in length, was performed by a 50-piece orchestral ensemble made up of some of Seattle’s most talented musicians and conducted by Grammy-award winner David Sabee.

The concert, held a year after the devastating earthquake and tsunami in Japan, raised $24,000 to assist in the recovery of the Sendai Philharmonic Orchestra of Sendai, Japan. The orchestra’s musicians had been performing at shelters and on street corners following the earthquake in an effort to boost the spirits of disaster survivors.

Part I: Snow at Sennjoyi Temple