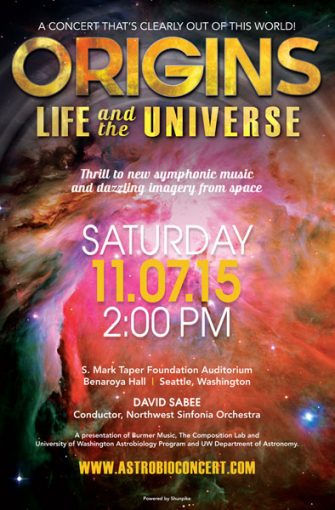 Origins: Life and the Universe

The mysteries of the cosmos were explored in Origins: Life and the Universe, an innovative multi-media concert held November 7, 2015, at the S. Mark Taper Foundation Auditorium at Benaroya Hall in Seattle, Wash. This event set rich melodic compositions against spectacular high-resolution film creatively assembled from video and still imagery sent back from space. The all-original music enhanced the visual experience, as colors and shapes faded and merged, and some of the most beautiful objects in space came dramatically to life, synchronized to the sound.

Each musical composition explored a different cosmic topic, from the Big Bang to the Oort Cloud to the evolution of stars. The eight featured composers were: Nan Avant, Barry Dowsett, Eric Goetz, Stan LePard, Howard Mostrom, Glenna Burmer, Tim Huling and Kohl Hebert, a 12-year-old musical prodigy in his orchestral premiere. The concert was presented by Burmer Music and The Composition Lab, and staged as part of the 50th anniversary year of the University of Washington’s Astrobiology Program and Department of Astronomy.