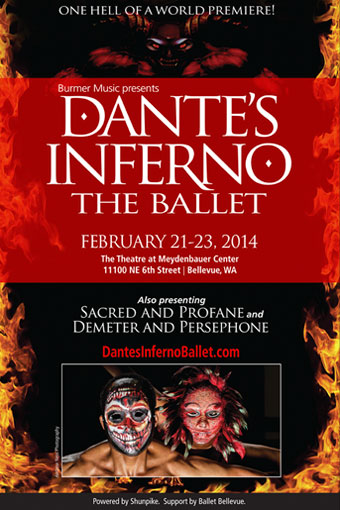 The music was composed by Glenna Burmer, conducted by Grammy-award winner David Sabee and recorded by Northwest Sinfonia. Ronald Tice, founder of Ballet Bellevue and master ballet teacher at the University of Missouri at Kansas City, created the choreography. The ballet is based on the first part of Dante’s poem, Divine Comedy, which chronicles the poet’s journey through hell, purgatory and paradise.

The concert included two additional world-premiere ballets: Demeter and Persephone and Sacred and Profane. Demeter and Persephone, with music by Tim Huling and choreography by Ronald Tice, tells the story of the Greek goddess of the harvest and her daughter Persephone. Sacred and Profane, a dialogue in music and movement between light and darkness, included an original score by Glenna Burmer and Tim Huling, with choreography by Jennifer Porter, retired Pacific Northwest Ballet dancer and former artistic director of Ballet Bellevue.

Scene I: Dante in the Forest of Sin

Scene III: Whirlwind of the Carnals, the Boatman of Styx and the Gate to Hell