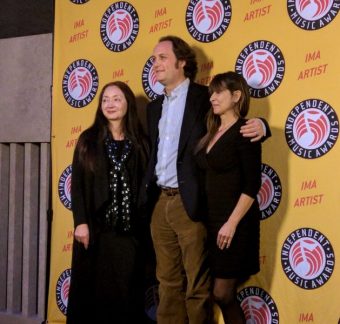 (left to right), traveled to New York City in mid-November for the 15th annual Independent Music Awards, held at Lincoln Center. The album, “Origins: Life and the Universe,” produced by Burmer Music, was nominated in two categories: Contemporary Classical Album and Long-form Video, but did not win.

“There were thousands of submissions,” said Burmer after the event. “We received a lot of compliments from the organizers but we didn’t make it past the last five nominees.”

More than 400 nominees in some 80 categories were culled from thousands of submissions sent in from around the world. The “Origins” concert premiered at Benaroya Hall in Seattle, Wash., in 2015. The previous year, in 2014, Burmer Music won its first IMA award for its acclaimed production of “Celebrate World Music.”

Despite the non-win, the event was a lot of fun, with attendees sporting “plenty of dark glasses, crushed purple velvet and patent leather,” said Burmer.